At this HPB MDT meeting, RBH radiologist’s inconclusive findings were over-ruled by the HPB MDT team.

Dr Mansoor stated (on record & in front of witnesses) that although he wasn’t present at any of dad’s HPB MDT meetings, staff present included “a more senior radiologist [needed before a scan can be over-ruled], an oncologist and an histopathologist, so they can look at the scans and confirm or refuse the diagnosis of him (Dr Mansoor)”

On April 29th 2015, the letter arrived with the names of the members of the HPB MDT team that were in attendance. 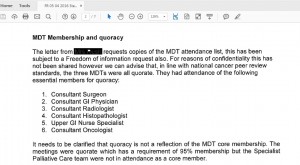 As you can see, although all names have been blocked from release, Kevin McGee is claiming that Royal Blackburn hospital’s HPB MDT attendance for all three of dad’s HPB MDT meetings (12th September, 19th September and 3rd October 2014) had six senior medical professionals in attendance.
This is simply not true!
Kevin McGee via David Chang (clinical lead for the NSSG cancer network in the North West and clinical lead for Royal Blackburn’s HPB MDT team) is publishing false information as regards staff attendance, not only to the family, but to our MP Graham Jones, the Department of Health and in other letters, the Information Commissioners Office (after a freedom of information request).

Why is this important?
To over-rule scans and test results, more senior, qualified staff must be in attendance at HPB MDT meetings.
There was no oncologist, no histopathologist and no radiologist present at dad’s HPB MDT meeting on 12th September 2014, when diagnosis was made.
This same HPB MDT meeting was not quorate (in that the correct qualified staff were not present, as is a legal requirement and required by the cancer peer rules).
Royal Blackburn’s HPB MDT team failed to adhere to strict protocols in regards to over-ruling scans/test results by referring the decisions higher up the chain, to more experienced and qualified staff (both within Royal Blackburn and further afield using the NSSG cancer network)

Not to mention the failures under their Duty of Candour not to publish or state (knowingly or not) false and misleading information.

Additional:
East Lancashire NHS Trust have been selected to pilot the national trial for “faster cancer diagnosis standards”
God help us all.

The business manager for gastro at Royal Blackburn hospital whom kindly provided us with the information we requested, to try and resolve the complaint, was subsequently moved off our case not long after it went to more senior HPB MDT staff.
We managed to contact her, she informed us that she had been told “the family have received all the information on the A4 action plan” when she asked about it.
This is not the case.

Dr Mansoor was promoted soon after, to the HPB MDT team at Royal Blackburn hospital (read of that what you will) under the clinical lead of, David Chang.

The “consultant histopathologist” quoted as being present at HPB MDT level by Kevin McGee, is none other than one Dr Richard Prescott, the same Dr Prescott that claimed to have “no contact with the living side of the hospital [ Royal Blackburn]” when insisting to the East Lancs deputy coroner’s office that he should carry out the post-mortem on dad.
This has now been confirmed as 100% accurate, in writing by Kevin McGee (Chairman of East Lancs Health Trust).